Uses and Benefits of Cover Crops 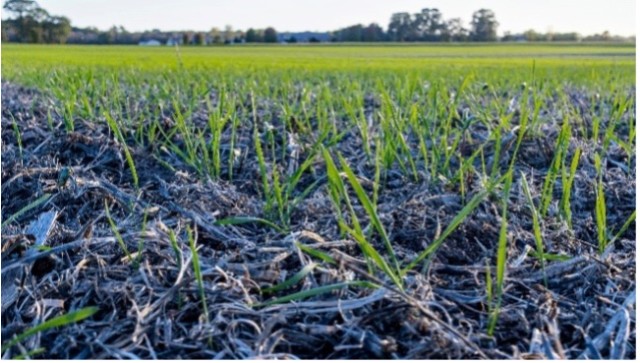 The use of cover crops in agriculture has many agronomic and economic benefits as well as challenges. In some agricultural areas, such as the Chesapeake Bay, cover crop use has been supported by funding to help increase water quality and reduce nutrient runoff and leaching during non-cropping months. According to the 2017 Census of Agriculture, cover crop acreage increased about 50% from 2012 (10 million acres) to 2017 (over 15 million acres).1

The desired use for a cover crop should be determined before choosing which cover crop to use because different cover crops can benefit for different reasons (Table 1). Grass species are more likely to hold soil in place from wind and water erosion; fast-growing grasses or Brassica species are a good choice for nutrient retention, and nitrogen (N)-fixing legume cover crops can potentially help reduce the amount of fertilizer N needed. Feed for animals through grazing or harvesting may best be accomplished with fall or winter grasses and legumes. Soil compaction is best addressed with cover crops with penetrating root systems, like radish and deep-rooted annual ryegrass. 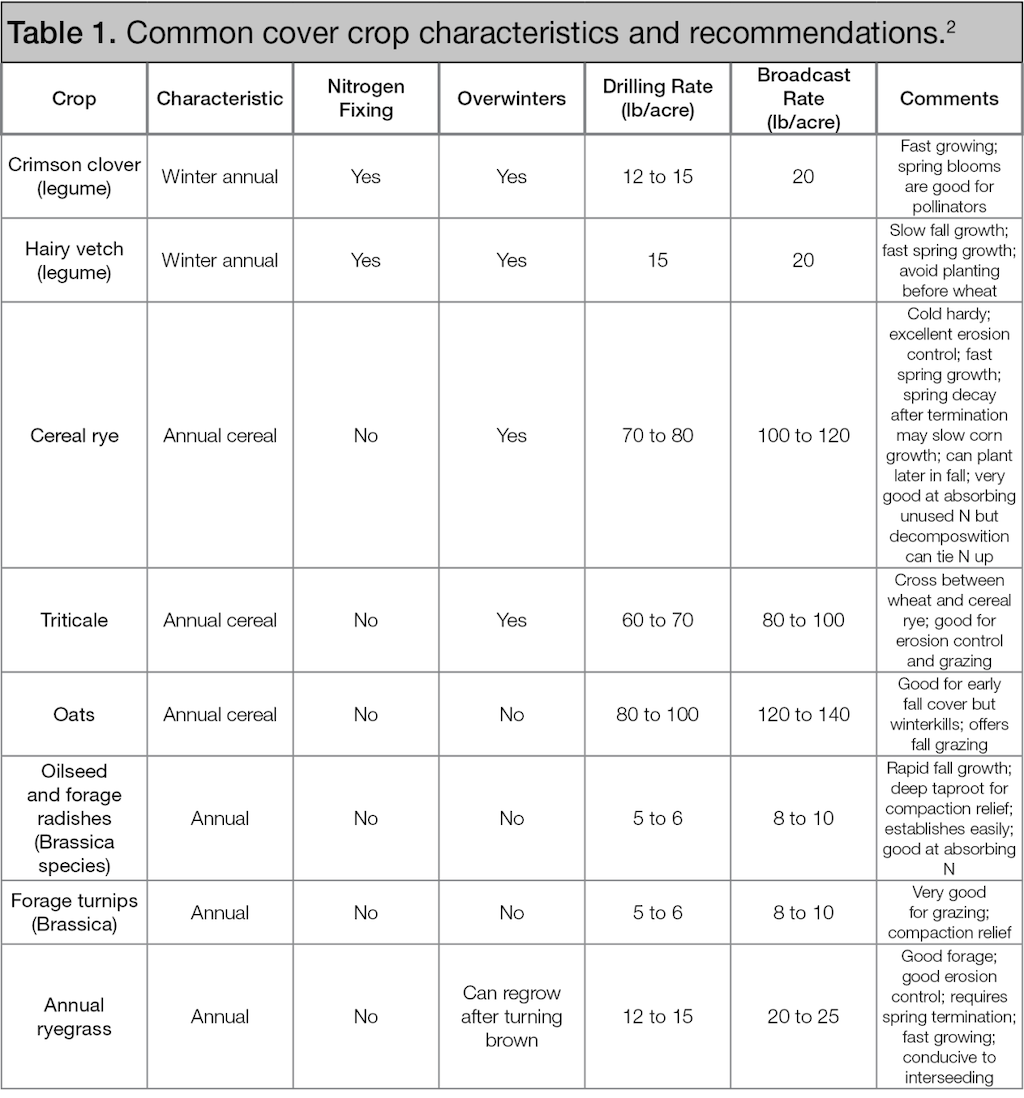 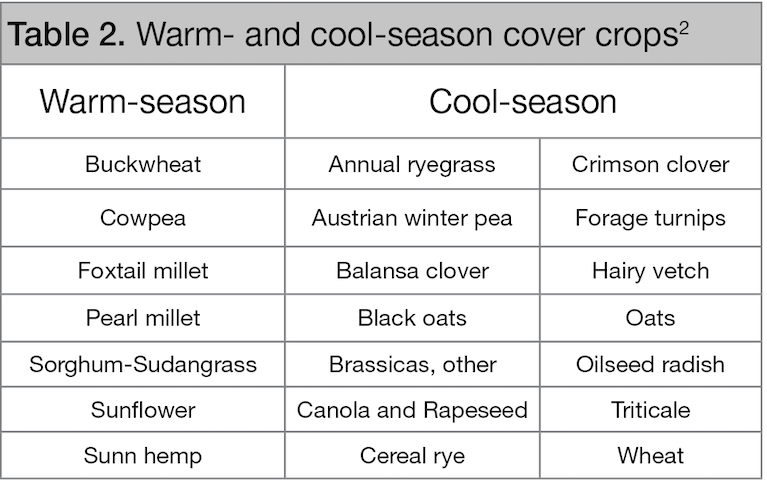 Cover crops can help fields rebound from intensive farming and tillage practices that have led to compaction, erosion, and soil structure damage. Root growth of cash crops in soils with subsoil compaction can be improved by increasing the presence of active living roots. For example, soybean roots can grow into root channels created by deep-rooted annual ryegrass.3, Reducing erosion is one of the main goals of growing cover crops and is dependent on how much the cover crop reduces the forces of soil detachment and transport. Soils are susceptible to erosion when they lack cover from a crop canopy and residues. Above-ground biomass from cash crops may only last four months but cover crops can be used to supplement additional soil surface cover. Cover crop growth extends the period of biomass production and can build soil organic matter (SOM). Climate and vegetation are two of the most important factors influencing the amount of SOM near the soil surface. Increasing SOM creates larger, more stable soil aggregates near the soil surface, which helps decrease the potential for soil detachment and erosion.

Soil structure, soil fertility, and soil health are associated with SOM as are many physical and chemical characteristics of soils. No-till practices help preserve the SOM gained from cover crop growth. Conversely, tillage quickly breaks down SOM. An approximate 9% SOM increase in the top foot of soil was produced from rye and hairy vetch cover crops on a no-till corn and soybean field in Illinois.4 Agricultural top soils have SOM levels ranging from 1 to greater than 5% with the potential to release 10 lb of N/acre/year for each 1% of SOM.5

Additional soil fertility benefits related to cover crop use include increased rates of infiltration, nutrient cycling, and residue decomposition. Cover crops can reduce nutrient loss by improving soil water infiltration. By keeping precipitation in fields, sediment detachment and transport can be reduced, which is important for the retention of phosphorus (P). Phosphorus is attached to soil sediment, and P losses in runoff were reduced by 54 to 94% with various cover crops and different site years.4 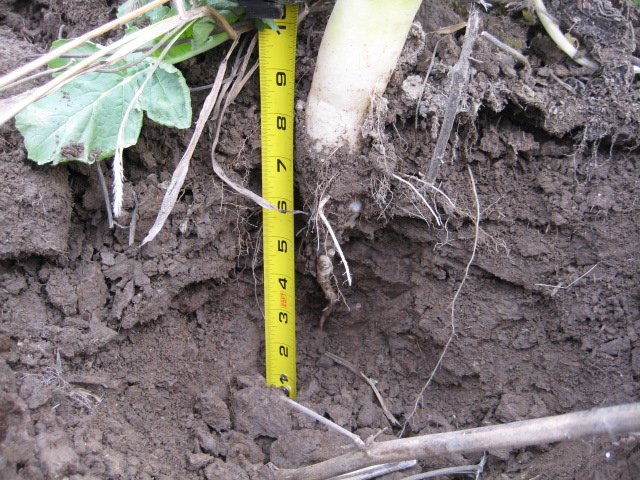 *Figure 2. Radish taproot down 8 inches along with annual ryegrass roots.*

Establishing cover crops for livestock feed provides a dual advantage – conservation and economic return through meat, milk, and manure. Residual herbicide labels should be read and followed as restrictions for livestock consumption may apply. Depending on the crop, grazing may occur in the fall, during the winter, or in the spring. For fall or early winter grazing, a fast-growing species should be used such as oats, rye, or Brassica species. However, rye should not be overgrazed in the fall because of lower overwinter plant survival and if in-spring grazing is desired. Brassica species should not be grazed alone because of their ability to take up excess N that may result in bloating of ruminants.

If spring grazing is desired, winter-hardy species such as winter rye, triticale, barley, or wheat are considered. If the cover crop is to be harvested for feed it should be cut by the boot stage for best forage quality and water preservation (water uptake increases during reproductive stages). Grazing helps keep some of the nutrients in the field while harvesting can remove nutrients but still provides soil health benefits. Crop insurance programs should be reviewed to determine any potential effect on insurance payments.

Cover crops are being used to help control weeds after harvest and into early spring before planting. A thick, robust, and healthy cover crop can help suppress weed growth by 1) changing the soil dynamics, 2) becoming established and growing quicker than weeds, and smothering weed seedlings. A lush cover crop can keep soils too cool for some weed seeds to germinate or for winter annuals to aggressively grow. Cover crops that winter-kill or are terminated with herbicides in the spring can provide a mat that helps keep weeds from germinating. Additionally, some cover crops produce chemicals that are toxic to certain germinating seeds (allelopathy).

Controlling cover crops before spring planting can be a challenge under some circumstances. Planning and scouting are critical for a successful control program. Removal of cover crops is influenced by the species used (grasses, Brassica species, cereals, broadleaves) their growth stage, temperature, and the crop to be planted. Methods to control cover crops include winterkill, tilling, mowing, and herbicides. The geographical location can limit or be advantageous for cover crop winterkill.

To minimize the potential for corn or soybean yield loss, cover crops should be terminated at least two weeks before planting the field crop. Termination four to eight weeks before spring planting may allow for faster soil warming, residue drying, and decomposition.5 However, delaying termination until two weeks prior helps maximize the benefits that cover crops provide. Should spring-time moisture be limited, consideration should be given to terminating the cover crop at six to eight inches tall.

While termination via tillage may accomplish the goal, it can reduce some of the benefits provided by the cover crop.6 Roller-crimpers can be used to kill tall-growing cover crops by breaking or crimping the stem of the flowering stage or later plants. Mowing can be an effective killing method for some species.

When selecting herbicides to control cover crops, consideration should be given to the cover crop species, the weed species present, the growth stage and plant height of each, weather conditions at application, and the nature of herbicide activity (systemic or contact), and the crop to be planted. Non-selective herbicides include contact herbicides (paraquat, glufosinate) and systemic herbicides (glyphosate). Systemic herbicides translocate (move within the plant) to the plant’s site of action, but the rate of translocation is influenced by plant metabolism. Actively growing crops under warm temperatures have higher metabolism rates that move systemic herbicides to their site of action more quickly. Therefore, applications should be made after three to four days of daytime temperatures in the high 50° to low 60° F range and nighttime temperatures greater than 40° F.7 __When using herbicides, the product label must be read for application guidelines and re-cropping restrictions concerning the following crop. __

Seeding rates vary depending on the seeding method and if a cover crop species is planted by itself or in a combination of two or more species. Aerial, drilled, and broadcast rates should be higher than if a row crop planter is used because seed-to-soil contact is much less. Smaller seeded species such as radish, turnip, flax, rapeseed, cereal rye, and barley are best suited for broadcast or aerial seeding. Larger seeded species such as peas and sunflowers should be drilled, or row crops.9 The mix ratio may vary based on the cover crop objective. A proportional rate for a two-way mix maybe 55 to 60% of the normal rate of a species by itself. A three-way mix maybe 35 to 40% of an individual species.2

Enrollment is your first step toward experiencing the benefits of practice change. Get full agronomic support from our team along with guidance on revenue potential.

Looking for more details about ForGround benefits? Tell us a bit about your needs.